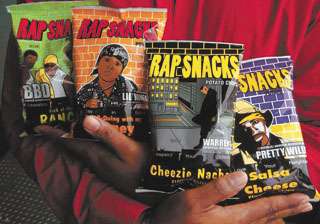 James Lindsay has had two passions from day one, there was never any doubt that Lindsay’s career would incorporate both food and music.” As a kid, I considered myself a snack food connoisseur,” Lindsay says. Like some sort of snack-mad scientist, he would often take various types of chips and mix them together in one bag in search of the next great flavor, to keep one step ahead of what was currently on the market.

With the help of family and friends, Lindsay gathered together $40,000 to start Rap Snacks, and in his first meeting with a distributor he sold 800 cases, which sold out in two hours. “I kinda knew then, hey, I might have something here,” Lindsay says.

Rap Snacks grew into a $5 million business, but temporarily plateaued due to the smaller size of the bags, which wasn’t as profitable for its producers. Laying low for around five years, Lindsay worked as a brand manager for rapper and fellow Philadelphian Meek Mill, which provided him with deeper insight into the power of the artist. The relaunch nine months ago meant Rap Snacks now produce larger bags and sell for a higher price, and so are more “user friendly” for manufacturers.

The intersection of music and food isn’t the most common Venn diagram, but it could be argued that hip-hop has a greater stake in the culinary field than most other genres. Food items are often used as vivid metaphors or simply as part of storytelling, and there are even shows like Vice’s F*ck that’s Delicious hosted by Queens emcee Action Bronson. For Lindsay, it isn’t that there’s necessarily some deep connection between hip-hop culture and food, it’s that hip-hop culture permeates everything.

“I just think that hip-hop is so open, it has no limitations. And it connects with different brands and products right now because it’s dominant. It’s the most dominant category in music right now. Everybody’s rapping now. No matter what color you are, what’s your background, everybody’s rapping. It’s a way to express yourself in a very truthful and honest manner.”

Previous artists featured among Rap Snacks lineup include Ol’ Dirty Bastard, Master P, Meek Mill, Yung Joc, Bell Biv Devoe, Baby, Big Tymers, Pretty Willie, Ms. Toi, Mack 10, and Pastor Troy. While limited partner Lil’ Romeo has returned with his flavor Bar-B-Quin’ With My Honey (“Besides the brand name and the artists on the bag, I was the first person to create a honey barbecue potato chip”) and a few old school names poised to make a comeback in time, Migos and Fetty Wap were the only two artists selected for the first round of the relaunch, the “Trap Queen” artist being the face for Honey Jalapeño. Interestingly enough, both Migos’ and Fetty Wap’s teams were initially displeased by their designated flavor.

“When I did the Migos flavor I let the owner of Atlanta music label Quality Control taste the Sour Cream with a Dab of Ranch and the Honey Jalapeño,” Lindsay says. “He tasted both of them, looked at me and said, ‘James, you gave me the weaker flavor.’ I said no I did not! That flavor is a very different flavor, and you have to understand that because you don’t like ranch doesn’t mean that everybody else doesn’t like ranch. You’ve to got look outside the box. Now he loves that flavor.

“With the Fetty Wap situation, Wap wanted the honey barbecue by itself, he didn’t want Honey Jalapeño. Now he loves that flavor too. It’s like, guys, you perform, this is what I do. Let me do what I do, I won’t let you down.”

With product located in about 40 different cities around the U.S. and a plan in place to establish a partnership with 7/11 in the next two to three months, Rap Snacks now operates out of Atlanta, or as Lindsay describes the city, the current “mecca of hip-hop music.”

“The connections here make it easier for me to get to the artists,” Lindsay says. “It’s so diverse, and when it comes to entertainment, everything’s happening. It’s a one-stop shop.”

And being on the pulse even before the heartbeat is exactly what can help drive Rap Snacks to heights that it wasn’t able to achieve during its first run. “I know who means what in the culture now,” Lindsay says. “When I put Migos on the bag, I knew that Migos had music before anyone else knew they had music coming out. I didn’t predict the “Bad and Boujee” number one record, but I knew those guys could make records. I always liked them and I thought they were always kind of underrated, and when you’re like that in music, all you need is one song.”